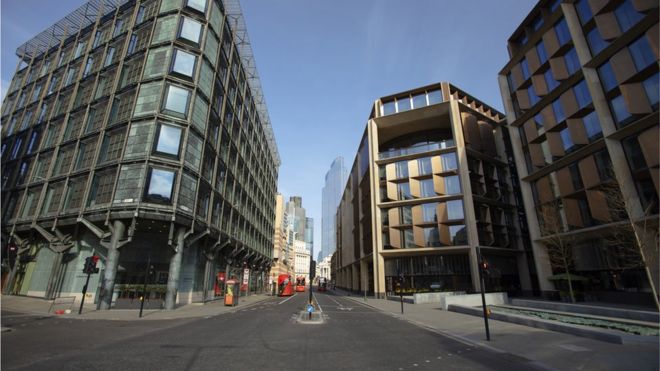 City centres could become "ghost towns" if the prime minister does not do more to encourage workers to go back to the office, the head of the CBI says.
Dame Carolyn Fairbairn said allowing staff to work from home had helped keep firms afloat during the pandemic.
But as offices stood empty, thousands of local businesses that relied on the passing trade were suffering, she said.
It comes as a BBC study found 50 major UK employers had no plans to return all staff to the office full time.
Writing in the Daily Mail, Dame Carolyn said the UK's offices were "vital drivers" of the economy, supporting thousands of local firms, from dry cleaners to sandwich bars.
"The costs of office closure are becoming clearer by the day. Some of our busiest city centres resemble ghost towns, missing the usual bustle of passing trade.
"This comes at a high price for local businesses, jobs and communities," she said.
She said getting people back into offices and workplaces should be "as important" as the return to school, and directly appealed to Boris Johnson to "do more to build confidence".
This could include using "effective test and trace" systems or a campaign to encourage commuters back on to public transport.
In July, the government dropped its formal advice that people should work from home if possible. At the time, Boris Johnson told people to "start to go back to work now if you can".


However, a increasing number of employers say that home working - which was initially brought in as a temporary measure in lockdown - could become a more permanent state of affairs.
The law firm Linklaters said this week that all of its 5,300 staff could spend up to 50% of their time working remotely from now on.
Lloyds Banking Group is reviewing its office space needs and working practices after concluding that most of its 65,000 staff have worked effectively from home during the crisis.
Others including NatWest, Fujitsu, Facebook, Twitter and HSBC have also said they plan to allow much more flexible working in future.
Experts say it could allow firms to cut their rent and utilities costs, while offering employees a better work-life balance.
'Communities harmed'
Dame Carolyn acknowledged home working had worked well for many and was likely to remain "an option".
But she warned of "serious downsides" including a lack of opportunities to train young people and foster better work and productivity in certain types of business.
The impact on local businesses has also been stark. Sandwich chain Pret a Manger - which relies on a lunchtime work crowd - said in June it was shutting 30 outlets and cutting 1,000 jobs amid a slump in demand. It has also cut its staff's hours.
"It's time for the UK to bring its workplaces back to life or we will look back with regret at the jobs lost, training missed and communities harmed," Dame Carolyn said.
Home service
Some businesses catering to office workers have stayed afloat by adapting the way they operate.
Rich Bool, who works for the mobile coffee franchise Cafe2U in Chippenham told the BBC's Wake Up To Money that when offices closed he had to find new ways of approaching his customers.
"Some of that has been actually going to residential streets, where our normal clients ... are at home, working, and asked me to call and deliver to them".
According to Mr Bool, this attracted curious neighbours, who were also working at home and needed a break from the laptop.
"We almost created the new water cooler moment on the pavement," he said. 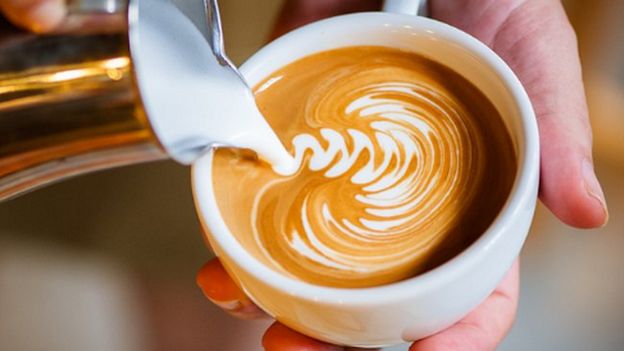 Sam Barber, a partner at Workshop, which offers co-working spaces in the centre of Winchester, says she has seen a significant increase in enquiries from people who no longer want to commute to London.
She told Wake Up to Money she sees a role for her company in bringing people back into the city centre.
"If we know that we can get people out of their offices, their bedrooms, wherever it is they're working, and into a flexible working space a couple of days a week ...then they're going to be shopping in local shops, they're going to be going to the local coffee shops."