The prime minister today broadened his government's attack on 'lefty human rights lawyers' by publicly accusing them of hampering the criminal justice process. The Law Society said his 'divisive language' puts lawyers and their clients at risk.
In his keynote speech to the Conservative Party conference, Boris Johnson repeated his manifesto commitment to put 20,000 police officers on the street.
However in a scripted remark likely to enrage the legal profession he added: 'But fan though I am of the police, we need to see results, not just spending; and so we are also backing those police, and protecting the public, by changing the law to stop the early release of serious sexual and violent offenders, and stopping the whole criminal justice system from being hamstrung by what the home secretary would doubtless and rightly call the lefty human rights lawyers and other do-gooders.' 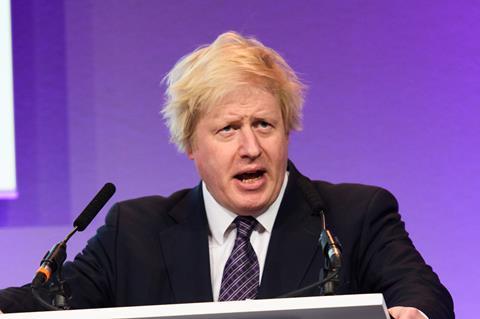 Criminal justice system 'hamstrung', prime minister tells Conservative Party conference
Source: Graham Carlow Photography Ltd
Johnson's language echoed that of home secretary Priti Patel, who on Monday denounced ‘lefty lawyers’ and ‘do-gooders’ in a speech promising the ‘biggest overhaul of our asylum system in decades’.
An obvious target of the speech is the Labour leader Sir Keir Starmer, a former member of Doughty Street Chambers. However the prime minister's comments, coming closely in the wake of the 'rule of law' furore over the UK Internal Market Bill, will alarm the legal profession.
Law Society president Simon Davis described the speech as 'deeply concerning'.
'This divisive language serves nobody and puts lawyers and their clients at risk,' Davis said. 'All solicitors advise their clients on their rights under the laws created by parliament. Legal rights cannot be rewritten through rhetoric.
Amanda Pinto QC, chair of the Bar Council, said: 'It is shocking and troubling that our own prime minister condones and extends attempts to politicise and attack lawyers for simply doing their job in the public interest. Lawyers – including those employed by the government itself - are absolutely vital to the running of our grossly under-funded criminal justice system. Their professional duty is to their client and to the court, and not to play political games.
'The proper application of the laws of this country is fundamental to the justice system and it is a lawyer’s task to set out the proper arguments to enable that to happen. Even the home secretary does not suggest that lawyers are hamstringing the criminal justice system.'
James Mulholland QC, chair of the Criminal Bar Association, said: 'The politics of cuts to justice knows neither left nor right only right and wrong in terms of the delay created by government’s wilful running down of the criminal justice system. Regrettably, the government’s short-sighted approach to criminal justice means that after more than a decade of cuts to the rates set for legal aid fees and lack of investment across the entire criminal justice system, it has strung itself up, creating a backlog of criminal cases that are at five year highs, charging rates which have fallen to a record low of just 7% - less than half the rate of five years ago - whilst police reported crime levels are at all time highs.
'What is worse, there are ever fewer criminal lawyers left to prosecute and defend to deal with a cataclysmic backlog of despair for victims, witnesses and suspects alike or to help government in their overarching duty to protect the public from harm.'